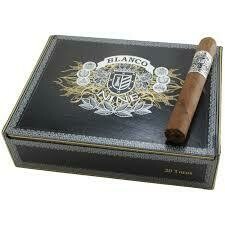 Blanco Nine Toro is thought to be one of the finest cigars in the Blanco portfolio. Considered to be somewhat of a flagship cigar, Blanco Nine was named for the 9 attempts it took to blend what the Blancos considered to be the ideal full-bodied cigar. Like its Blanco counterparts, Nine is made by hand down in Nicaragua in the Plasencia factory. Only the finest leaves are used, including Nicaraguan Ligero filler, a Nicaraguan Jalapa binder, and a dark Nicaraguan Oscuro Corojo wrapper leaf. That’s right, Blanco Nine is a Nicaraguan puro, with every component coming out of Nicaraguan soil. The result is a powerful, rich cigar blended to be enjoyed by the most demanding connoisseurs.

Dark and oily, Blanco Nine appears to be one beast of a cigar, and it really is. The Plasencias don’t mess around when it comes to rolling premium cigars. That holds true here, as Blanco Nine is expertly rolled to provide a soft draw, a slow, even burn, and plenty of rich, creamy smoke. Coffee and earthy tobacco are the core flavors of the profile, along with bakers’ spices and a hint of woodiness lingering in the background. Expect heavy white pepper on the retrohale, along with a long, thick finish. Full-bodied and surprisingly well-balanced, Blanco Nine is a delightful cigar for any experienced aficionado. The 6” x 52 Toro is an elegant, powerful way to get acquainted with the blend, as it offers a lengthy, intense smoking experience.

The Blancos make a variety of cigars to appeal to all audiences. In the case of the Blanco Nine, we have a masterpiece that should be enjoyed by seasoned connoisseurs only, as the full-bodied complexity will likely be taken for granted by less experienced enthusiasts. Nine pairs well with dark beer or black coffee and is a great choice after a hearty meal. Some more mainstream cigars comparable to the Nine may include Padron Maduro or Oliva Serie O Maduro. Experience the best of what the good folks at Blanco Cigars have to offer with Blanco Nine Toro. As the Blancos say, the Nine is a ten!