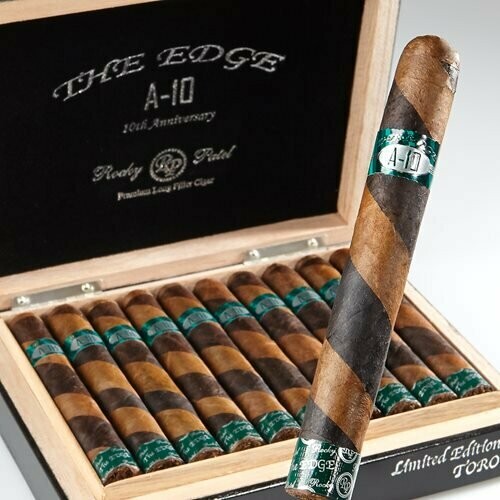 Happy 10 years to The Edge!

After a much-anticipated delay, Rocky Patel The Edge A-10 is ready for enjoyment, and it was well worth the wait.

Crafted in celebration of the 10th anniversary of one of Mr. Patel’s most coveted lines, The Edge, A-10 is nothing short of a showstopper. The Edge initially hit shelves in 2004. A-10 was the result of intense hard work and effort, as Rocky demanded only the best tobaccos adorn this anniversary blend. But good news, the standards have been exceeded by leaps and bounds.

Sporting a barber pole wrap from primary band to foot band, A-10 catches the eye from a mile away. The dual wrapper utilizes the maduro and Corojo leafs that were used on the original Edge releases.

Beneath, a Honduran binder can be found with vintage long-fillers from Panama and Nicaragua filling out its core. Refined notes of sweet spice and leather can be found stemming from the maduro wrapper, with hints of black pepper and earth appearing as a result of the Corojo wrapper.

Quantities are extremely limited for this 10-year anniversary blend, so we recommend scooping up a gaggle before everyone else discovers the gold mine.